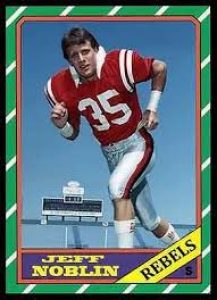 Jeff Noblin is a former Ole Miss football player who carried his knowledge of athletics into his career as an orthopedic surgeon.

Noblin started his college football career in Minnesota but found his way home to his native Mississippi in 1983 to play free safety for Coach Billy Brewer. Noblin was following behind his uncle, James Harvey, who had also played at Ole Miss before signing to the Oakland Raiders for six seasons.

When Noblin was not on the field, he was working hard in the classroom and earned a degree in history with minors in biology and chemistry.